Samuel Cook was born in Clarksdale, Mississippi, in 1931. He was the fifth of eight children born to Charles and Annie Mae Cook. In 1933 the family moved to Chicago. His father was a minister in the Church of Christ (Holiness), so, unsurprisingly, Samuel’s first foray into the world of entertainment was a fairly typical one: at the age of six he joined three of his siblings as a member of the Singing Children gospel group. When he reached the age of fourteen, he joined a more professional gospel group called the Highway QCs, becoming the lead singer whilst still in his teens.

In 1950, still only nineteen, Cooke joined the gospel group the Soul Stirrers,  replacing R. H. Harris as lead singer. The Soul Stirrers had a contract with Specialty Records, who released their first recording under Cooke’s leadership in 1951. The song “Jesus Gave Me Water” was followed by more gospel tracks, including “Peace in the Valley”, “How Far Am I from Canaan?”, “Jesus Paid the Debt”, “One More River”, “Nearer to Thee” (1955) and “Touch the Hem of His Garment” (1956), the last two being written by Samuel.

In 1956 Samuel reworked a gospel song called “Wonderful” into a secular number entitled “Lovable”. He wanted to perform as a solo artist and he also wanted to reach out to a wider audience. But that was not easy. There was strong opposition in the church to gospel artists performing secular material. In addition, when he spoke with Art Rupe, the owner of Specialty Records, about going solo, Mr Rupe gave his blessing, thinking that Samuel would follow the example set by Little Richard. That was not what Samuel had in mind. Instead, he wanted to follow in the footsteps of Nat King Cole, who, remarkably, had attended the same Chicago high school as Samuel, just a few years before. Samuel wanted to sing classic ballads such as Gershwin’s “Summertime”. When Rupe could not be persuaded to back this approach, Samuel and his producer at Specialty, Bumps Blackwell, left the label. Samuel was probably emboldened by the comments of his father, who encouraged his son.  “My father told me it was not what I sang that was important, but that God gave me a voice and musical talent and the true use of His gift was to share it and make people happy.” To mark this new beginning as a secular artist, Samuel made a small adjustment to his name. In 1957 Samuel Cook became Sam Cooke.

He had not made a mistake! Over the next seven years he had thirty Top 40 hits on the US charts and set up a music publishing company and a record label. He wrote a string of classic pop songs and became a global star.

“Lovable,” produced by Bumps Blackwell, had been released under the name Dale Cook, in an attempt to distance the gospel and the secular output, but Cooke’s voice was so distinctive that everyone knew it was Sam. Now, having left the Soul Stirrers and their record label, he was free to move on. In 1957, he signed with a small label called Keen Records and recorded “Summertime”, with one of his own compositions, “You Send Me”, a pop ballad with hints of R&B and Gospel, on the B-side. It was the B-side that caught everyone’s attention and took Cooke to the top of the Billboard R&B chart and the Billboard Pop chart. The second of these chart entries is significant. It was not unusual during the 1950s for songs recorded by black artists to be covered by white singers and released at the same time. In this case, a cover version was recorded by Teresa Brewer, that reached number eight on the Top 100 chart. Sam Cooke’s appeal proved stronger across the whole spectrum of the record-buying public. The other point of interest concerning this song is that Earl Palmer played drums on the track. He had played for years in New Orleans, with all the local artists including Fats Domino and Little Richard. Now, in 1957, he moved to Los Angeles, to work with a wider range of artists, including Sam Cooke. Specialty Records also issued a Sam Cooke single in 1957, to take advantage of his new-found success. The song was “I’ll Come Running Back to You”, which also reached number one on the R&B chart. Altogether, this was a pretty good start to his solo career.

However, he recorded three albums for Keen Records, “Sam Cooke”, “Encore” and “Tribute to the Lady”, none of which made much impression. Three compilation albums from Keen Records also failed to chart. It was the singles market that held sway. Strangely, the success of the first two solo releases was hard to repeat. Keen released around twenty-five Sam Cooke singles and EPs between 1958 and 1960, with only three entering the R&B charts top ten and none reaching the top ten on the Pop chart.

Cooke decided that he needed to work with a larger record company, so signed with RCA Victor in January 1960. His decision was no doubt made a lot easier by the $100,000 that the label’s producers Hugo & Luigi offered him! The move was successful in re-igniting Cooke’s career, as he recorded a series of songs that have become classics. Over the next four years he released eighteen singles, only two of which failed to make a chart entry. The best of the sixteen chart entries were “Chain Gang”, “So Glamourous” and “Sad Mood” in 1960, followed in 1961 by “That’s It, I Quit, I’m Movin’ On”, “Cupid”, “Feel It” and “Just for You”. “Chain Gang” rose to number two on both the R&B and Pop charts in the USA and to number nine in the UK. “Cupid” did better in the UK, reaching number seven, while only making number seventeen and twenty on the US Pop and R&B charts.

1962 brought further success with “Twistin’ the Night Away” achieving the top spot on the US R&B chart, number nine on the Pop chart and number six in the UK. Two double A-side singles were released next, “Bring It on Home to Me”/”Having a Party” and “Nothing Can Change This Love”/”Somebody Have Mercy”, which charted high on the Pop and R&B listings (respectively number 2, 4, 2 and 3). The follow-up “Send Me Some Lovin'” completed Sam’s best year yet by also achieving the R&B number two position.

Just three more singles were issued before Sam Cooke’s death at the end of 1964. They were “Good News”, “Good Times” and “That’s Where It’s At”, which all made it into the US Pop chart, with the first two reaching number eleven.

Just as with the Keen albums, Sam Cooke’s RCA albums failed to make much impression. The company released eight studio albums over four years, with four entering the US album chart. The highest position achieved was number thirty-four by the last of them, “Ain’t That Good News”. RCA also released two live albums, one towards the end of 1964 and one in 1985. The first of these, “Sam Cooke at the Copa”, went to number one on the US R&B albums chart. The company also released eight compilation albums, with only the second “The Best of Sam Cooke, Volume II” making any impact.

In 1961, Cooke had set up his own record label, SAR Records, with J. W. Alexander and his manager, Roy Crain, although Sam himself continued to record with RCA.. The label soon signed the Simms Twins, the Valentinos (who were Bobby Womack and his brothers), Mel Carter, Billy Preston, Johnnie Taylor and L. C. Cooke, Sam’s younger brother. ABKCO has released a double CD of SAR Records songs, highlighting the religious and secular sides of the company’s output. It is good value, presenting fifty-six tracks.

Sam Cooke also created a publishing imprint and management firm named Kags. He was a prolific songwriter and wrote most of the songs he recorded. He also had a hand in overseeing some of the song arrangements. The publishing company enabled him to keep control of his own songs!

In 1963 Cooke signed a five-year contract for Allen Klein to manage Kags Music and SAR Records and made him his manager. Klein negotiated a five-year deal (three years plus two option years) with RCA Victor, which involved Klein setting up a holding company called Tracey Ltd (named after Cooke’s daughter) which supposedly brought Sam tax advantages. The downside was that Tracey Ltd. owned the rights to all Sam’s work.  The significance of that was only clear when Sam died at the end of the following year.

The circumstances surrounding Sam’s death are obscure and disputed. He met a young woman called Elisa Boyer in a Los Angeles bar and then took her to the Hacienda Motel. He is alleged to have assaulted Elisa Boyer and then argued with the motel’s manager, Bertha Franklin, who shot Cooke in self-defence.  In court, the shooting was judged to have been justifiable homicide. Some people believe that Sam had walked into a trap, set up by Elisa Boyer and Bertha Franklin, to enable them to steal money from Sam.

Thousands of fans attended Sam’s funerals. The first was held  in his former hometown, Chicago, with two hundred thousand people lining up to view his body. Then the second service was held in Los Angeles, with several artists, including Lou Rawls ( a friend from childhood), the Staple Singers, Billy Preston and Ray Charles, performing in tribute to “the King of Soul”.

Following Sam’s death, there has been a steady stream of new songs, re-issues and greatest hits packages, several of which were released in 2020. His music has remained popular.

Probably the best song that he ever wrote topped the charts in the year after his death. When Sam had heard Bob Dylan’s “Blowin’ in the Wind”, he had decided to write a song of his own that would set out his hopes for a better America. It is light years away from the Pop songs and love ballads that he is known for. It was adopted by the Civil Rights Movement, which is entirely apt, as it grew out of a racist incident involving Sam and his wife. The song is “A Change Is Gonna Come”. Strangely, it was issued as the B-side of “Shake”!

On Oct. 8, 1963, Cooke tried to check into a whites-only Holiday Inn in Shreveport, La. He had made a reservation, which had been accepted. However, when he, his wife Barbara and two other colleagues went to the reception, they were turned away by the manager. An argument ensued, with shouting and car horns being sounded, and all four were arrested. That experience fed into the new song, which he sang for the first time on February 7th 1964 on The Tonight Show. Three days later, on February 10th 1964, the House of Representatives voted in favour of House Bill HR 7152, which became the Civil Rights Act of 1964. The song has been covered by a host of performers, both black and white, a fitting tribute to his stature as a song-writer.

Aretha Franklin, Otis Redding, Paul McCartney, John Lennon, Rod Stewart and the Faces, Van Morrison and many more make up an impressive list of artists who have covered one of Sam’s songs. 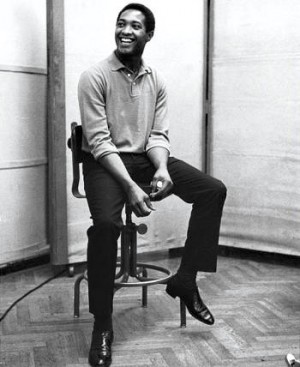 “While other rhythm-and-blues artists stressed visceral sexuality, Cooke was essentially a spiritualist, even in the domain of romantic love. When he did sing dance songs—“Twistin’ the Night Away” (1962), “Shake” (1965)—he did so with a delicacy theretofore unknown in rock music.”

AllMusic biographer Bruce Eder wrote that Cooke was “the inventor of soul music”, and possessed “an incredible natural singing voice and a smooth, effortless delivery that has never been surpassed”.

He also wrote one of the greatest songs ever written.